I’m on a Mac with a retina display, and even if the Whitney ScreenSmart is not blurry, it is less readable for me than the Lucida Grande of the old version. The new font quickly causes me eye strain (I’m not young anymore…). It would be nice to be able to easily change the default font globally in the preferences.

Oh, I just discovered the style menu at the bottom right!

It solves my problem.

I suspect the problem is that you’re testing on a Retina level display on the Mac, and when testing for Windows you’re only testing on Parallels on the same Mac. You need to use Windows with a 98 dpi non-Retina device–or boot into Windows on an older non-Retina Mac.

My situation is I find the font on old.newsblur.com much more readable - I would love the option to have that font instead, if it’s available in the settings as an option to switch to, let me know. I also lost a couple of preferences, but by checking old.newsblur.com I was able to restore them, so all fine there. thx for leaving that up for a bit, it’s useful to have that to compare settings etc.

IMPORTANT ADD: I have played with the font style options, but they don’t appear to have any impact on the overall font or appearance.

As a sidenote, the Evernote shortcut plug in is still broken.

On my Firefox browser on Windows 10, old.newsblur.com renders .feed_title as: Verdana.

It looks like Whitney SSm A from typography.com doesn’t seem to support TrueType subpixel anti-aliasing, which looks absolutely horrendous.

Solution: give Windows users the ability to revert back to Verdana for interface elements such as .feed_title et al, as I’m sure a large amount of users like me probably don’t care about how it looks, so long as it looks sharp and legible. Windows users tend to like sharpness (i.e., conforming to the pixel grid) over the accuracy of font rendering–and as I understand, since Mojave, the Mac has gotten rid of sub-pixel font anti-aliasing all together. Most of the world still use 96 dpi displays and not retina displays. And for me, until the 32" 8K display become cheaper so that 3 of them wouldn’t cost more than a family sedan, I won’t be upgrading either.

LONG FORM:
So I checked the look and feel of old vs beta.newsblur.com with Chrome on Windows 11 (I use Firefox) and indeed the same problem occurs–everything on beta.newsblur.com looks “blurry” as @jim6 has stated.

So tried a solution. I hit F12 and changed the following:

And viola! Everything on beta.newsblur.com looks sharp and crisp again.

I suspect that @samuelclay just never had chance to test it on a Windows 10 browser on a 96 dpi non-Retina screen, and Typography.com deserves a slap in the face for offering fonts that don’t do proper subpixel hinting and not warn people about how crappy it will look on non-Retina displays.

The style menu lets me change the font, and some of them are an improvement over the new default, but none of them are “Just use the browser’s defaults, you know, the font I chose for myself because it works for me”.

My temporary workaround, is to use the CSS override plugin using this rule:
body {
font-family: Verdana;
}

Don’t even need a plugin for that: Newsblur’s account settings has a place to enter custom CSS/Javascript.

Oh wow, thanks so much @Bill_Waldron - I just pasted the same CSS into Account | Custom CSS and it did the trick!

Hello - confirming that the tips from Bill and Haute solved my Windows font display readability issue on beta.newsblur.com via the custom CSS feature and Haute’s code. Thanks both that is wonderful!!!

Solved for me too. Thanks all.

Here’s a full window snip showing this. It’s not exactly blurry to me, but it is very hard to read. This is from my Surface Go. It’s even harder to read from my full size computers with 24inch or larger displays.

Font is too thin, for starters.

Maybe as part of fixing make the font user-selectable on the web as well as the apps? 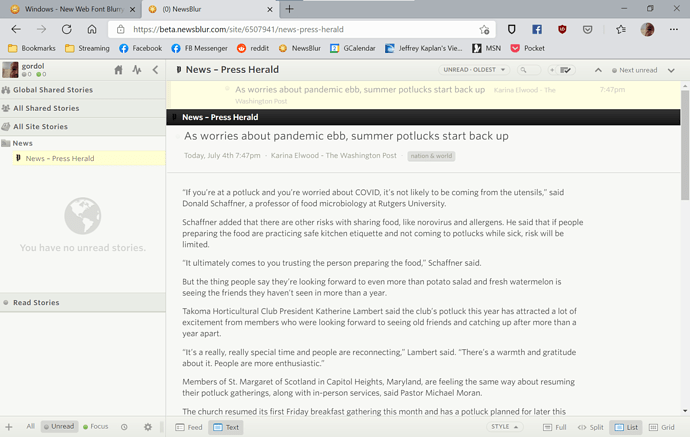 Using same font - Palantino / Georgia - same setting etc. Problem seems to be the grayish background as opposed to the whitish background on the old newsblur. How would I change the background via CSS?

Is there a way to copy the entire CSS from old to new?

I tried using the custom css account setting, but it looks like the font picked by the “style” menu takes precedence over that.

eta: Aha. Setting the font for “#story_pane” seems to make it trump the other settings.

In my case the font type gets changed by the custom CSS, but not the font size. Am I doing anything wrong (I have no clue on CSS coding)?

Good news, I just launched a new control for changing the feed title and story title fonts. It’s under the Manage menu and on your dashboard. Choose between three fonts.

You’ll need to remove your Custom CSS to make these work. I promise you that if you expected Verdana, you’ll get it if you choose Lucida Grande (which falls back to Verdana, just like the old site). 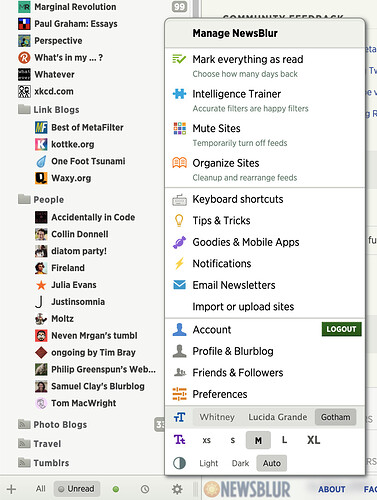 Neat.
Add Lucida Grande to the Story style menu as well for consistency?

Thank you so much, for me this makes things brilliantly readable again.