I’ve noticed a few glitchy behaviours in the iOS app UI ever since the latest update (v.9). Often it seems related to when I open a link in browser and then tab back into NewsBlur.

For example, in the first photo the post being displayed is read, but in the left pane it is showing as sort of half-greyed out and the thin leftmost bar shows it as unread. This is after having already displayed as “actually” read /fully greyed. The actual state also seems to be read, because attempting to mark it as read by dragging in the left pane resets it to unread. 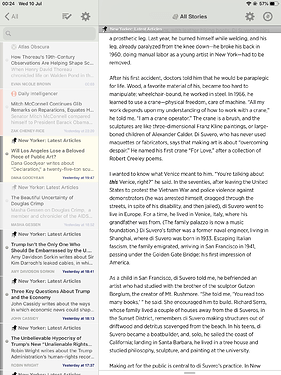 In this one you can see at the bottom the cogwheel and plus sign have turned bright blue for some reason. If I tap on the wheel for a second it reverts immediately to the correct colour scheme. 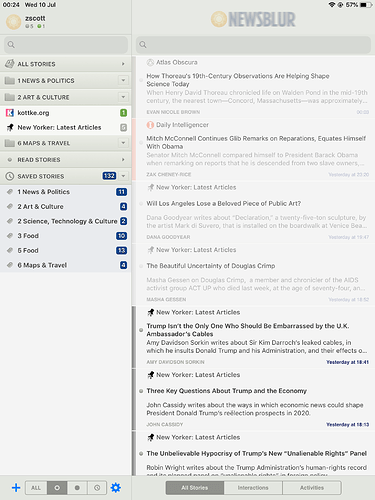 Here you can see two tabs for “Scroll horizontally”. 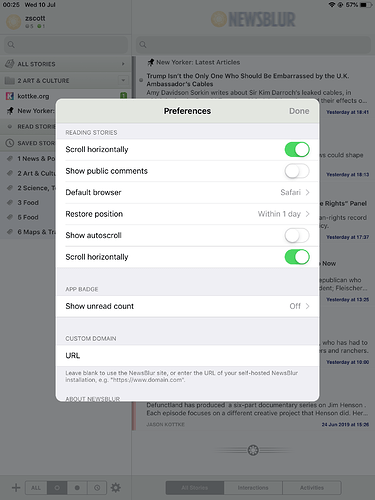 Lastly, unpictured bug but perhaps the most annoying one - sometimes it seems when I shift between a link opened in browser and back to NewsBlur, it un-marks-as-read that story, and marks a DIFFERENT story as read. I suspect but am not sure that the one it is marking as read instead of the correct one has taken on the correct one’s previous index number of unread stories because it seems usually to be the story immediately adjacent to where the correct story had been. Sorry if that is unclear - it’s hard to depict but something is clearly going wrong.

I’m seeing something similar to this in the latest IOS version. I haven’t spent a lot of time trying to determine sequence to reproduce (I’ll try to pay attention), but it has happened several times. My app will get into a state where I can select a story on the left, but the view on the right will not change. it will change to read in that view, but when I go back to the main screen of the app, it will be there with all the others as not read. I can’t read stories until I kill the app and load again.

Thanks for writing this up. I’ve posted a ticket here:

Thanks - it seems like in 9.1 this may now be resolved but this evening on iPad, take a look at what is now happening when I tab out of NewsBlur and back in to it… only resolved by closing the app and reopening: 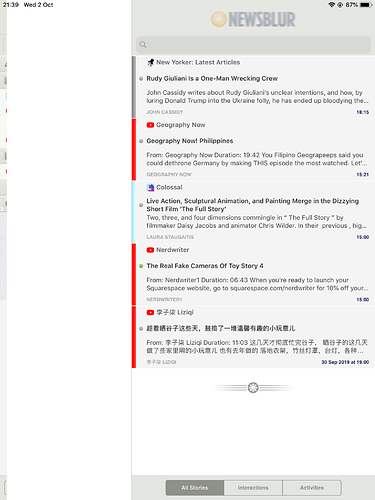 The left pane is still responsive if I tap in the narrow column where it is visible, but the big white block doesn’t respond in any way.

I’m experiencing the same issue that Zach is experiencing (latest version 13.1.2 of iPadOS on an iPad Air 2). See the screenshot below. 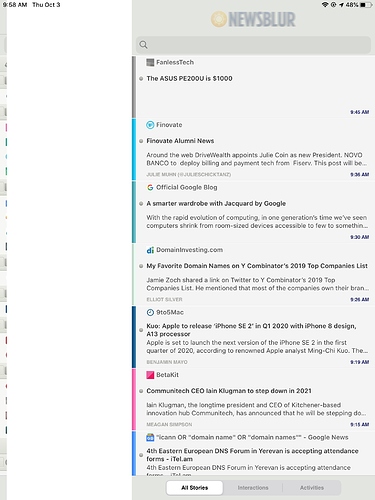 Only closing and restarting the app fixes the issue.

How do you get into this state? Is this when you switch from another app? From returning back into the feed list? Swipe? Button? I’ve also reopened the issue so we’ll get it fixed soon.

It happens for me when switching from another app (when Newsblur is trying to regenerate the list of unread stories per folder, presumably).

Interestingly, if I unlock my iPad’s orientation, and switch from portrait to landscape, it’ll force a refresh, and the left panel will be fine again.

I’m also seeing the same problem on iPad portrait-mode in Newsblur 9.1. I didn’t find this “wonky” thread when I first searched for duplicates, so I created a new topic:

NewsBlur iOS app on iPad in portrait mode fails to redraw screen properly after switch to another app then return. Left side article listing pane becomes blank. If an article was open on the right, on return it appears like a weird pop up window. Can no longer tap anything “underneath”. If I kill the NewsBlur app (double click Home, swipe app up) and restart, then it once again works fine (until I switch away again). It always works fine in Landscape mode, no problems. NewsBlur 9.1 iOS 13.2.…

This is more than a little “wonky” - it’s unusable in portrait mode on iPad. 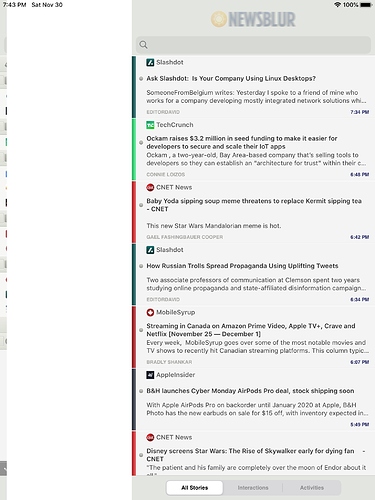 Any updates on the issue of the blank column shown in George’s post? I have the same issue on my iPad. Currently running 9.1.

I’m about to release a new version with a couple huge features as well as a rollup of all these bug fixes. I really should have released a bit sooner but I’m glad it’s finally ready to roll now.

Just to followup on this issue, the latest version of the iPad app appears to resolve things (no problems at all since the update).

Agreed, much improved since v.10, thanks! I did have the below happen a couple of times (now with black bar instead of white!) but I can’t replicate it so far. 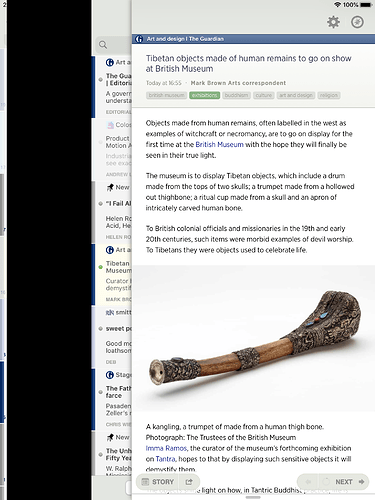