The past few days, I’ve noticed an odd UI issue. Not every time, but most of the time when I view a story in the android app, once the story finishes rendering, certain UI elements become invisible. Basically everything except for the story itself and the bottom navigation buttons. So the app bar at the top, the article title, and the share/save buttons become invisible. This is occurring across multiple devices, though the ones I’ve tried have all been Samsung - S5, S6 and S7. The one I use the most is android 8.0.0 / Samsung experience version 9.0.
Here’s an example where everything is working fine: 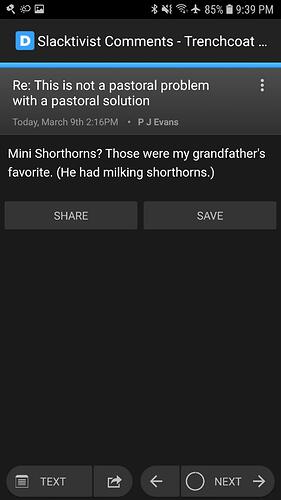 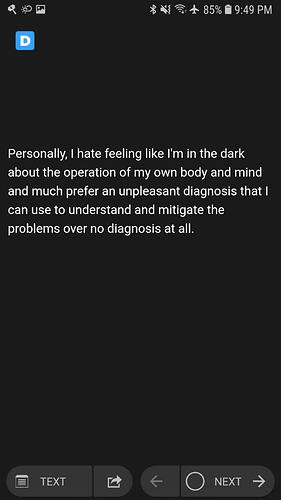 Screenshot_20210309-214935_NewsBlur1080×1920 67.7 KB
It seems to correlate to the length of the article - the elements don’t vanish if the article is very short. It’s hard to tell for sure, but it seems like the UI elements appear at first, then vanish when the article body finishes rendering, so possibly it’s a race condition?

Any advice would be appreciated. Thanks.

Can you do me a favor and use the app’s Manage > Send Feedback menu item to send me the versions of everything. I’d like to know if you’re running the beta or not, and if not, then if you can try that out.

Ok, try upgrading to the latest beta. You can join by going to the NewsBlur page on the Play Store and joining the beta. Here’s more: Try new Android apps before they’re officially released - Google Play Help

Okay, thanks. The problem persists even after installing the beta. Here’s some more information I’ve managed to glean:

I was mistaken before about it occurring across multiple models of phone; it occurs on multiple samsung S7 phones (I’ve tried 3) running android 8.0.0, but not android 7.0 on a Samsung S6 or a Google Pixel 2 running android 11. I think someone in my household might have an S7 that hasn’t been updated and I’ll try that if I can.

One other thing I discovered is that if the article is long enough to scroll, the text of the “save” and “share” buttons will be visible after scrolling, but the buttons themselves are not.

Okay. I’m not sure exactly how, but I have found a partial fix/workaround/solution to the problem. The reports of issues in multiple apps due to Android Webview got me thinking, so on one of the affected devices, I changed the “Browser” setting in NewsBlur from “system default” to “in-app browser”. That seems to have fixed the problem. Curiously, even if I change the setting back to “System default”, the issue remains fixed.

This resolved the problem on one phone but not the other. I’m trying to narrow down what else is different between the phones

That is strange and makes me wonder if there’s anything we can do about it in the app.