You mean you have a site open and you can tell that new stories are coming in? If that’s the case, I actually know that new stories have come in, but I am not refreshing the active site because it would be jarring for the site to randomly refresh as you’re reading it.

Ah, you’re right. I haven’t thought at that. It does make sense not to refresh the story list pane and the feed view. I got confused by the fact that I left a site completely read, come back later, saw that the site list had new stories for the site, but they didn’t appear in the story list pane, so I have to click on the site to get them.

Don’t know if it’s possible to have some kind of innactivity tracking and update the story list and feed view when the user hasn’t done anything for, let’s say, at least 30 mins.

I considered something along those lines. But what I used to do was not actually update the unread count on the active site until you click off of it. Then it would update to the correct unread count less than a minute later. I found this was inconvenient, although I’m starting to think that this might be worse.

I guess I mentioned this in another thread on this topic, but what about an indicator in the little grey bar at the bottom of the river offering to reload the feed because X new stories are available?

A shortcut would go along with this really nicely. I hate having to go back to the dashboard and then back into the feed to refresh. I suppose just clicking the feed again would also reload, but I prefer to do as much with the keyboard as I can in my feed reader.

Great idea with the keyboard shortcut to force a feed to display the stories that appeared in the meantime while reading it.

How about Shift+r for this?

Another thought, why can’t the story list simply get refreshed to include the new stories without changing the *selected* story and the reading pane?

That way when a new story comes in I can see it bolded in the story list and click it. As long as the selected story never changes there is nothing jarring to the user.

It will still push the current story down. And as images load, it will continually push what you’re reading down.

What if when a new story arrived for the feed currently being viewed, a notification banner would slide down and say “Hey, a new story came in, want to see it?”. Clicking a link in the notification would refresh the current feed.

For usability the notification banner should be small as to not interupt reading.

I hate my own mockup but to help communicate the idea consider this screenshot. 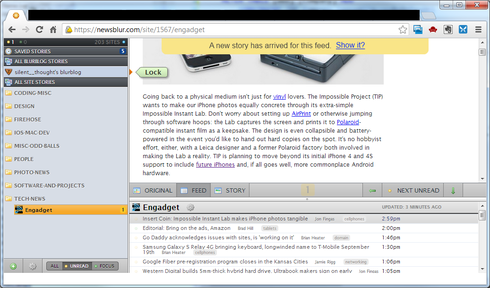 Tweetbot does something well to this effect. They also hide on scroll. This wouldn’t be hard to build, but I have a feeling it might be prone to error. Sometimes the counts update but are off by 1 and don’t get corrected for 60 seconds, when the next refresh call is made.