Grrrrr. Why is it SO hard to find out about the different service levels?

I have a free trial account, and I’m about to upgrade, but WAIT! What’s this??? Super-mega-premium? Hmmm. A buck a month more. Hmmm.

So, let me see … hmmm … where’s the table of features … hmmm … not in About. Not in FAQ. Surely not in API or Press. GitHub? Feedback? The Blog? Nah. So where the luck is super-mega premium explained?

Well, it’s only a buck a month, so I’ll just go ahead and pay. Done.

And, while I’m on the subject, where is that service level info actually specified? I understand that Shiloh is starving. I understand — believe me, I really do understand — that software is a bitch and scaling is hard, but this is business 104: Make it easy for your customers to buy!

And one more thing: A note to all the helpful people out there who might point out that the service level page is at http://tinyurl.com/easy-to-find-even-…, I can’t find the page from where I am (my account page). If I could, I would, but I can’t, so I won’t.

One more “one more thing” thing. (It’s potentially infinitely recursive!) My account status is “Premium”. I thought I was “Super-Mega Premium”. I really don’t want to associate with just preemies, I want everyone to know that I’m a super-mega preemie!

Who is this guy? It seems like he has an attitude problem.

How hard is that to understand?

If you think the service is worth more than $1 a month, and it is, then pay more.

Initially, NewsBlur was kind of hard to judge as it was hammered by the influx of Google Reader people. It went from less then a thousand subscribers to like over four thousand in less than two weeks. And the number of non-paid users went through the roof.

But now that it is stable, it seems as responsive as Google Reader was and I am happy to know that my feeds are not being mined for data by some creepy company.

Well worth at least $2 a month.

I signed up today and saw the Super-Mega-Premium option too.

I had wanted to try Newsblur FREE for a while, but that option was not available (due to the huge demand with Google pulling the plug on Reader). Anyway, I couldn’t see any explanation of what Super-Mega-Premium offered over Plain-Ordinary-Premium, other than the warm feeling of paying a dollar extra each month, so (being the cheapskate that I am) I opted for the $24.

I’m guessing it is just “if you’re feeling generous”. I see nothing wrong with that, but it would have been better to make this clear on the payment options.

I really don’t want to associate with just preemies, I want everyone to know that I’m a super-mega preemie!

No, your comment slipped in before mine. I was commenting on myself.

I was just letting off steam because I couldn’t find out what the difference between what I thought were two levels of service. If I had known that the difference was just a donation, I likely would have just gone ahead and paid the extra buck-a-month anyway.

I think we’ve spent enough time on this. 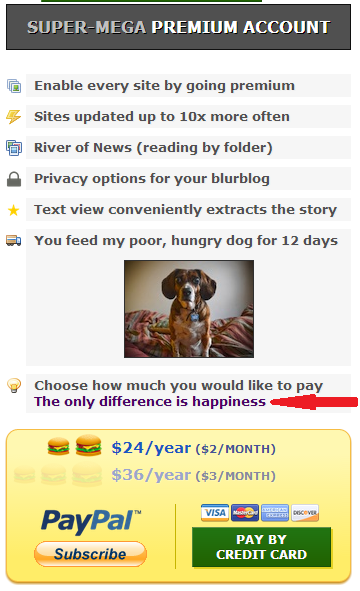 As I understand it, they are all the same but you can choose to pay more if you want to.

Vladimir, I suggest you relax.