I would like to have an option for user-generated themes. I love the idea behind newsblur, but cannot become happy with its interface. A first step to get there could be to provide us (everyone who feels similar) with a zip containing all the css files and little images. Using browser-extensions for restyling could be a first step then. Eventually some screenshots would appear, and if the results are good, hosting the themes and making them accessible through the user preferences might become an option. 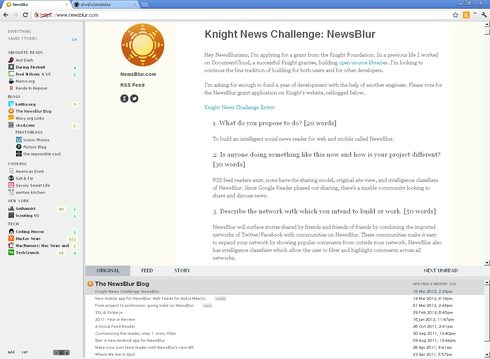 Should get much more refined over the next days, it’s just a beginning for now.

I was actually just about to post a wishlist item for an option that would let me increase the size of Newsblur interface without changing the font/image sizes in the feed story page displayed inside Newsblur.

I’m guessing this would possibly solve this issue of mine.

Yes, it would. If you know some css and have a look at Github it would be possible to do it on your own : )

Great stuff, makes a compelling argument for a custom CSS text box. To make these style changes, you can just paste all of your CSS into a single box, right?

Sam - are you still considering adding a custom CSS box? With all the recent improvements to the Newsblur UI, I’ve been able to boil down my PlainReader UI to a set of userstyles.

There are browser extensions for user styles, one I use is called Stylish, it is available for Chrome and Firefox.

On Mac I am doing the same in Fluid (this is a wrapper to create standalone applications from web-sites) and user-styles to make Newsblur more compact. But having an option to choose/customize themes/styles is a great option, even if it only will be a couple of links to user-styles with screenshots.

A Flat & Clean GUI style is also under development: https://getsatisfaction.com/newsblur/…

I totally support this. I think it’s a fine idea. I’m going to support it in two capacities: at first, just a custom css box so you can re-style any part either yourself, or just import a theme by copying its CSS file. Then, I’d love to build a first class theme garden. Obviously, the custom css box will be coming much sooner than the theme garden.

If enough people vote for this, I’ll build the custom CSS box much sooner.