Overnight, rendering of stories in the Android app broke for every feed. There is a black background with most text also black and thus unreadable. Most of the text is also overlapping, and some images overlap each other as well.

This happened after a Chrome update was installed. I don’t know if Newsblur on Android uses Chrome, but since Newsblur itself didn’t update, it’s the only lead I have.

I’ve attached a screenshot below. This is basically what every story looks like. 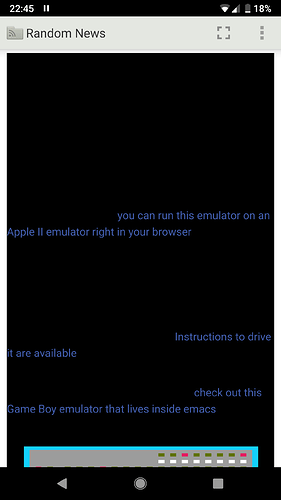 Can you use the “Eend app feedback -> Email a bug report” option from the main menu in the app to send us a report? Might help us figure out what is up.

I see the same behavior too. If you switch to Dark or Black theme you can at least read most of it

So I’m going on a week long vacation starting tomorrow, so I won’t be able to fix this in the next week. But thank goodness dark mode still works and will fix it for the time being.

Well, I can’t use any other theme - my eyes are literally bleeding… :(((

As a temporary fix - on some devices, it may be possible to go into the Google Play store and uninstall the update to the Google Chrome WebView “app” that recently updated.

rolling back the Chrome update

How do you roll back the Chrome update?

this drops it back to the version that came with the last major OS update for the phone, not the last individual update through google play. that may be farther back than you want to go, on an older phone.

Had the same issue for the last several days, finally came to the forums and glad I found this.

I uninstalled Google Chrome from the play store as mentioned above, which resolved the issue.

Android 9 here. Android system webview is disabled. So far as I understand Chrome has replaced it from Android 7 onward. I have uninstalled Chrome updates and that solved the issue. Cannot completely uninstall Chrome since it’s part of the OS (Android One).

I strongly recommend that you do not roll back Chrome updates, since those updates typically include security fixes that will leave your device vulnerable if you uninstall the updates.

The better approach until Samuel can get this fixed is to use the dark mode. That way you still have functionality in the app but also have full security via the Chrome updates.

Dark mode it is… not so good for my eyes

Forced to dark mode too. Please fix this.

Any idea on when this is going to be fixed?

new webview update dated 3/26 is supposed to be “Bug fixes and speedy performance improvements” but does not fix this for me.

Broken for me as well. Webview was disabled, so removed Chrome updates, which resolves Newsblur problem.

Any word on a fix?

Seriously, that’s major thing for (paid, as me) users. Please fix it ASAP.
Thanks in advance

Completely agree. This is getting ridiculous. I’m extremely frustrated with the lack of attention. The last comment from Samuel Clay was two weeks ago with no update since then to even say he is working on it. I understand he was on vacation for a week, but he has been back long enough to devote some time to this.