I haven’t been on Newsblur much lately, only stopping in every few days to click a few stories. So I may be out of step with some recent changes.

That said, stories trained as “red” seem to have gone AWOL. I’ve clicked around the preferences and interface for five minutes but can’t seem to get them back. As you can see at the top of the screenshot, there should be quite a few of them.

(As an aside, I also have not seen any evidence of changes to the Intelligence Trainer, which is supposedly revamped now. I wonder why? Checked in both FF (my usual) and Chrome.)

Yeah, red stories have been phased out. The old intelligence “slider” was too confusing. If you hide a story, then there’s no need to be able to see it at all times. You can still use the “Show hidden stories” button in individual sites to get them back, but only temporarily.

And that’s the point, you only want stories marked red when you know you want them, which is a temporary event. Gone they go!

Thanks for the reply. I see.

Trying to rework how I use Newsblur now. Hmm.

I primarily used red to denote sites that updated frequently that I was not interested in following story for story. But I did (do) like to go through the reds sometimes to see what was there.

Because I now have to dig to find where reds lurk it feels like whereas there were 3 valid classifications before now there are only 2. Or maybe 2.5. At first glance, red classification feels quite lacking in utility under this new scheme.

So, I’d like a view that lets me see which sites have red stories without clicking through all 200+ sites I am subscribed to. Is there a way to do that, and/or is that a feasible feature to consider?

(Also, is there a difference between clicking these two bits of UI? Seems like no.) 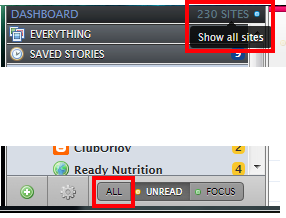 To answer the bottom question first, there is no difference, although the reason I left the top button is because if you are in Focus and you want to be able to see all of your sites, you can just hit that top button.

However, I have a redesign coming out at some point soon and that will effectively phase out the header as you know it. I launched this in its half-way state because it’s far easier for new users and makes more sense considering the value of the intelligence.

As for reds, if you used it as a classification system, then you’ll want to readjust and only use the thumbs down for stories you don’t want to see. I realize this is a breaking change, but very few people were reading reds the way you were. And it is far simpler with the new unread/focus system.