Newsblur seems to stop advancing to the next story even though there are more unread stories.

I use the “n” shortcut key but after while it stops working even though I have more unread stories. Here is a screenshot showing what I am talking about: 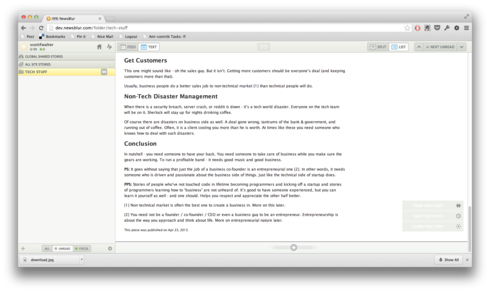 You will see that on the right pane I reached the end but the left pane shows I still have 99 unread stories.

I hate having to refresh my browser to be able to get through the rest of the stories.

Yea, I have this issue as well. Sometimes the dev version just refuses to load beyond a certain point for a site. Non-dev doesn’t seem to have this issue.

same issue, but the “its not happening to me answer” is not the expected response when paying for a premium account.

Saw that this was being worked on a month ago, but I have the issue as well. Mac user, issue appears on any browser (Chrome, Firefox, Safari).

Same here. Problem has existed for me for about a month.

I really hope this gets resolved soon. Its very frustrating.

same problem but you can hit ‘r’ to reload the feed as a workaround. Would be nice if ‘r’ was closer to j/k so I don’t need to move my hand

I have the same problem, I can only read six feeds and
then I need to refresh to get the rest.

Will this issue be fixed soon.?

I’m having the same issue. Premium user. In the Everything folder I can read about 10 stories before it stops advancing on ‘n’. And yes, ‘r’ will reset it for about 10 more stories. It’s making me think about finding another reader.

Thanks for the tip but that doesn’t do it for me (though I’m glad to have that pane hidden). It doesn’t seem to matter what view I use. I get eleven (I just counted) hits on n before I have to hit r.

I heard they might download 12 stories at a time. Perhaps it has something to do with that?

Well, let me update that. If I go to List view and Feed, I appear to be able to go for more than 12 posts.

Yeah I get this too. If you select a folder and use shortcuts to navigate through stories it will stop loading after 10-20 stories. Changes based on feed. Only work around is manually reloading by hitting “R”

Salvatore, do you have story titles hidden?