Minor graphical bug in the sidebar.

When you press the little triangle next to a feed that’s in a folder within another folder the dropdown should open beside the feed but instead it opens in the far left and two litte triangles are visible. 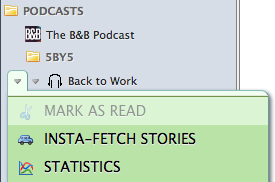 BUMP to get the developers attention.

Doh, thanks for pointing this out. I have nested folders myself, so I actually see this quite often. It only happens when you open the menu for a folder 2 or more levels deep. I’ve messed with the spacing on that thing so many times, I just decided to ship it. At least it works.

Anyway, I’ll get back to fixing this at some point soon. It’s on my bucket list.