This has been an ongoing issue but I only just now caught a live one:

Know your “One Job”, continued

Holy macaroni batman, I was not expecting that post to ignite a shitstorm. It felt like a pretty straightforward observation: you were hired to do a job, you should do your best to do that job. Int… 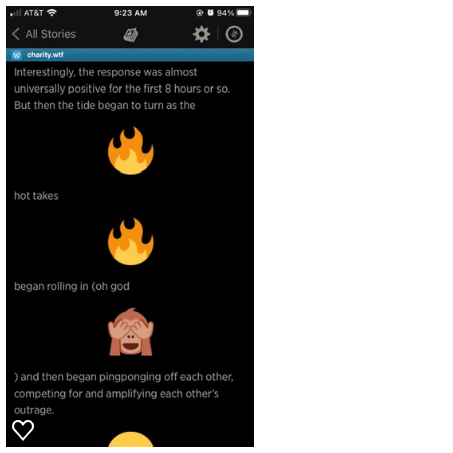 The “emoji” are shown HUGE… except these are not emoji. They are actually getting translated into svg images on the backend, probably because of something Wordpress is doing presumably to preserve Unicode legibility???: e.g. https://s.w.org/images/core/emoji/13.0.1/svg/1f615.svg
Relevant from the feed:
<img src="https://s.w.org/images/core/emoji/13.0.1/72x72/1f525.png" alt="🔥" class="wp-smiley" style="height: 1em; max-height: 1em;" />

I don’t think it’s specific to this feed, I think I’ve seen it in e.g. Captain Awkward feed CaptainAwkward.com (again /feed/ has been trimmed but is in the URL) .

Anyway, if you asked me, a literally random person in the street, I would say that the style height 1em stuff isn’t getting properly processed on the iOS app side. I know nothing about any of that stuff though.

Very nice writeup. This is now a ticket and will get worked on soon enough:

iOS: Some small images are being enlarged by NewsBlur

See https://forum.newsblur.com/t/ios-app-wordpress-feed-interaction-makes-images-huge/8627. The web shows: iOS shows: Now it's true that the web doesn't have full bleed images, but iOS could use some logic...