i just tried to import my starred items from reader. on dev.newsblur.com i used the import/export option that explicitly said “import saved stories from google reader”. this worked, and now i have those as saved items. unfortunately, in the process of doing so, it seems to have re-synced my reader subscription list, which is seriously deprecated, and i’ve lost almost all the subscriptions i care about from newsblur.

hmmm, it was definitely clear on www.newsblur that it would override the sites, which is why i haven’t re-synced since the first time. but per your twitter suggestion, i tried it via dev.newsblur. i got 3 options: 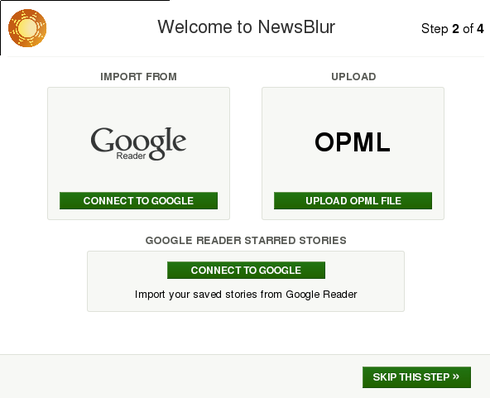 and chose the bottom one, because it suggests it only imports the appropriate stuff, as you say. i don’t know if there’s a bug somewhere or if i made a mistake, all i know is that after the process was complete, my subscription list had largely gone away, which surprised me. i’m happy to help you repro this if that has any value, or we could just file it as “spooky”.

in any case, thanks very much for the restoration; i had only added 1 subscription since the version you sent me, which i just re-added manually.