The problem can be seen at https://newsblur.com/site/5243584/chris-morgans-blog in my most recent post, which it calls “<strong>Don’t use the Unlicense</strong> it’s an inferior license wrapped in an atrocious name.”, with content starting “<p class=intro>”.

The source Atom feed is https://chrismorgan.info/feed.xml, which is a valid Atom feed. I don’t believe anything has changed about its generation since my last post in June 2021, which was interpreted fine.

I use <content type="html"> like just about everyone with Atom feeds, and <title type="html"> which is much rarer than it should be (—the idea that titles should be unformatted plain text is absurd, for all that it’s almost universally so implemented).

NewsBlur has coped with previous entries from my blog, including stripping my nice <code>, <strong> and <i> markup from the titles of the other four of my last five posts which all had HTML in their titles too. But this time it’s just treated my entire entry as though it were type="text" throughout.

I am unaware of having changed anything on my end, so I believe this is a regression in NewsBlur.

Looks like the XML file has the encoded HTML in it. 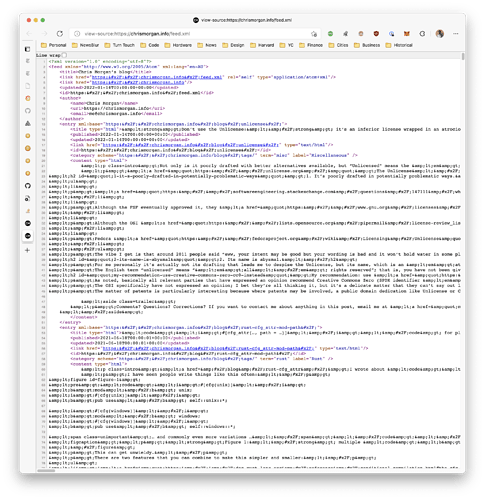 Sigh. Mea culpa. One of those cases where you look at it, and look at it, and convince yourself the double encoding is correct and as intended, and so become blind to the fact that it’s not. Thanks for pointing out the problem, I’ve identified the cause and fixed it now.