How do you create new folders

my folders are there from google news reader import, how do i create new folders

There is a ‘plus’ button at the left, bottom, it says ‘Add Sites’ when you hover it. When you click this button a window-like page comes up and adding folder is the second option there.

Any ideas on how to make this more discoverable? Obviously, I want the user interface to remain as uncluttered as possible.

I don’t think there is something wrong with the ui. Functions that are not used very frequenty -like ‘adding folder’- shouldn’t be in places that can be seen at the first sight.

So, I just spent 5 minutes idiotically trying to create a folder (Finally searched in GS for the answer, obviously). I’m not sure I’ve ever actually created a folder in NB since I already had things sorted in folders in GReader, so this was a fun UX challenge for me.

My users-never-read-things understanding of the + button is that it’s for adding a feed, so I didn’t even consider the possibility that I could create a folder there. But really, that’s only partly true. My expectation was that the drop-down list for choosing a folder for a new feed would have a “…Create new folder” option in it that would let me create and select a folder right there. Same with right clicking on a feed from the main view… Right click feed, Move to Folder, select Create New, boom, done.

Brilliant insight. Added a new option to the folder context menu. Thanks for the help!

Hmm… how would one make a new top level folder this way? I don’t use nested folders, so the + Folder option in a context menu doesn’t address creating a new folder while trying to organize a feed or add a new one.

You can either create a new folder the old way (click on the + button in the bottom left), or you can add a new subfolder, but then change the parent folder during creation. (It’s the drop-down in the top right of the fieldset)

That’s still a little unwieldy/unintuitive, I think.
How Gmail does it with Labels/Folders puts the option right where you’d potentially need it: 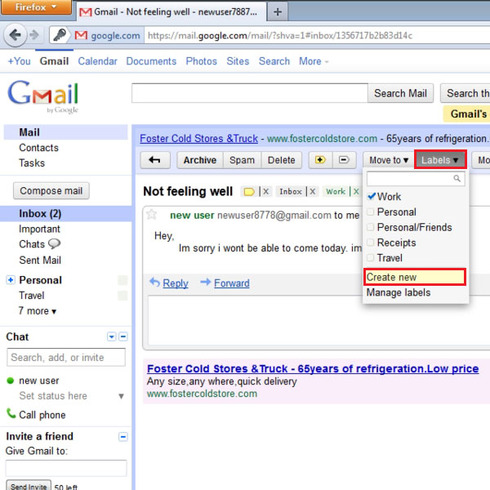 I went to the + and tried twice to add a new folder. The entire app just sat there with that bouncing blue dot for a couple of minutes and then the add screen poofed without a new folder being created. Does that only work when adding a new feed?

The process of going to the add-feed + in the bottom left is a very non-intuitive way of adding a folder to the list. I had to search the GS forum to see Samuel’s answer above regarding it, and even then it was not obvious that I could just add a folder without having to add a site to put into the folder.

There is a simple fix for this - for some reason, the UI does not let you simply add a folder when you pick the “MOVE TO FOLDER” option on a site’s dropdown menu. Adding this would not clutter up the main UI at _all_, and would make adding a new folder for sites to go into very intuitive.