This is happening quite often for me as well. I’m subscribed to a couple of Github feeds for NewsBlur and it happens on those the most.

In addition to keyboard navigation breaking, I’m not able to even click on the story in the story list. The only way I’m able to mark the duplicates as Read is to use the SHIFT+A shortcut. 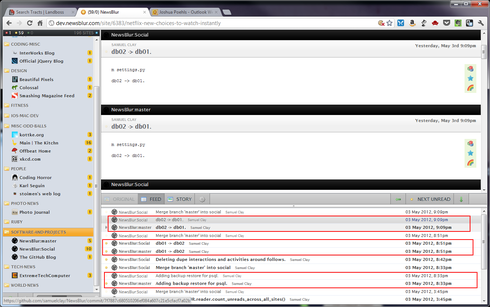 The reason this isn’t fixed is because there absolutely should not be duplicate stories. Can you share the address of these feeds so I can investigate?

Here are the two feeds illustrated in my screenshot.

… and a snippet of their content as of now which will contain the exact stories in the screenshot.
https://gist.github.com/2596922

I added the “commits on social” feed and don’t see any duplicates. Are you getting them there?

There aren’t duplicates in any single feed view, the duplicates show when viewing the folder (or Everything).

If I mark those posts as unread in the master and social feeds, then view the folder or Everything then I see the duplicates* and the behavior described above still happens.

* They aren’t really duplicates since they are on separate feeds and as such I’d expect to see them twice.

Are you saying that if there’s a story that appears on two different feeds (from the same site) that on marking one read you shouldn’t see the other when you switch to that feed? (Suppose you’re reading only one feed at a time.)

where the story is

It would be nice if once you marked it read in one feed then when you switched to another feed it wouldn’t even show up (if you have the feeds set to show only unread stories) but I didn’t really expect it to be implemented since it is somewhat of an edge case, and though not rare (for some sites) it isn’t frequent enough to be truly objectionable.