I’ve been having some trouble with the Mother Jones feed (http://feeds.feedburner.com/Motherjon…) where some stories will show up numerous times. It’s not a huge issue, but it’s kind of obnoxious to have to scroll through so many copies of the same story. 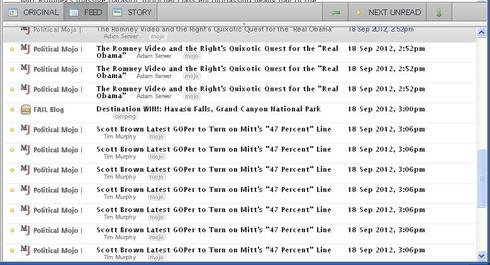 I’ve seen that too. I wonder if their post updates are coming through as new posts for some reason - I’ve flipped back and forth and have noticed a few minor differences between posts, which is why I say that.

Yeah, Mother Jones is one of the only feeds that does this. I suspect they are randomly generated their guids, but it’s been hard to pin down. I also think that you are seeing the edges of my dupe detection system. I try to load all stories that match the guide given, as well as the last X stories, where X is the number of stories from the feed. But somehow this isn’t getting enough stories because the X+1’th story is then being duped.

I changed the fetch to include 1.5*X stories, which may work a bit better. Let me know if you continue to see it on stories dated after today.

On an unrelated note, Newsblur is absolutely awesome, and your attentiveness to problems and questions is spectacular. I came here from Google Reader and I’m never going back.