Like a lot of other people (I guess) I subscribed to the “Cyanide and Happiness” webcomic:
http://feeds.feedburner.com/Explosm

For some reason the last article shown in Newsblur is from January 21, the last two days are missing as well as January 20th. “Instafetching” oder removing and re-adding the site doesn’t help. This already happens since a few days.

I noticed the same issue since I joined a few weeks ago. I only got an update once with several days worth of content.

7 days now without any update. The problem seems to be permanent.

Good news! This is now fixed. Luckily, this feed was a great test case. Thanks for reporting it. It should work form here on out. Let me know fi that isn’t the case, especially as I just changed how stories are de-duped.

I will report if there are any more problems with this special feed.

I didn’t get the update for January 31, February 1 and 2. Anyone else?

Not exaggerating, I’ve had this issue for months, but never could bring myself to post anything about it. I can’t see why this RSS feed is special compared to all the other ones I use.

I’ve been following it now for a week and it looks like it’s working. New stories are coming in OK.

I removes the feed and added it again, it looks like its working now

Edit: A day later… The sorting is messed up and the last update of from feb 11.

Yeah the sorting is messed up and the last update is from feb 17 while there where updates on the last three days.

Just want to note that this is still not working properly. The last update ist from 25.02, while there where four updates in the meantime.

Still doesn’t work properly for me, there seems to be a “500” timeout: 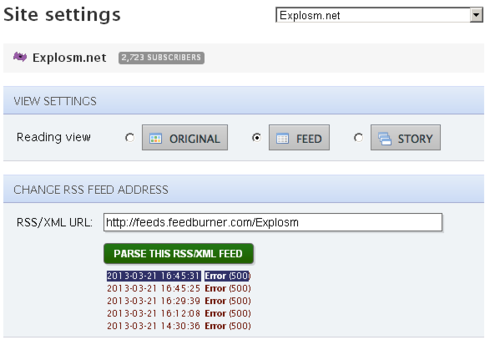 “Parse this RSS/XML Feed” returns a message “Not modified (304)”.
NewsBlur is missing the update for today, yestersday and a lot of other days. Also the sorting is still messed up:

I really hope this get’s fixed soon, now that it has almost 3.000 subscribers.

I still experience trouble with the feed…

It seems to work today, all missing articles showed up.

Update: Four days later we are again missing articles and have a messed up sorting. I have now almost given up on this.

The Explosm.net feed is still broken with over 3.000 (!) NewsBlur subscribers due to the statistics.