Benefits of owning a self-hosted NewsBlur?

Then everything else is working fine. Yeah I haven’t bothered to fix the fonts thing on my own installation either. It’s a bit hard with localhosts and not distributing unlimited keys.

So I’m not sure what’s broken now. Feel free to poke around the logs of different docker containers and restarting things to see if anything changes. I’ll need a bit more to go on, since it looks like everything is humming along.

I found I can actually signup (I found DB entries) and login. But after login the page was still redirected as show, with login 302 and a broken image (https://localhost/media/img/reader/default_profile_photo.png) 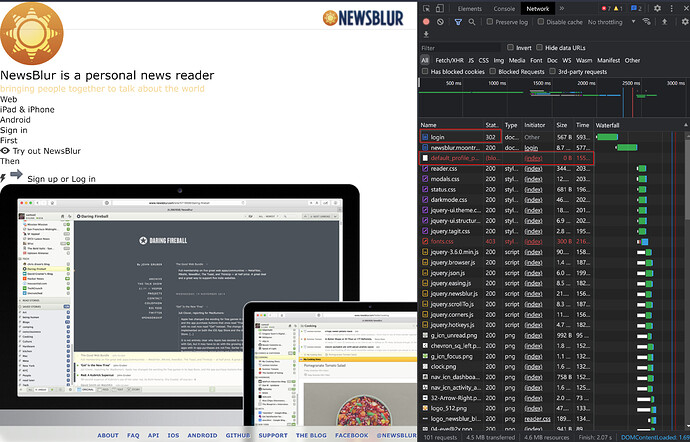 Are fixing these 2 elements can get me a working instance? Checked all the docker logs and everything run fine…

And the left-pane has gone after I try login at /account/login. Sounds like some UI elements are not loaded somehow. Is it the newsblur_web container controls the UI? 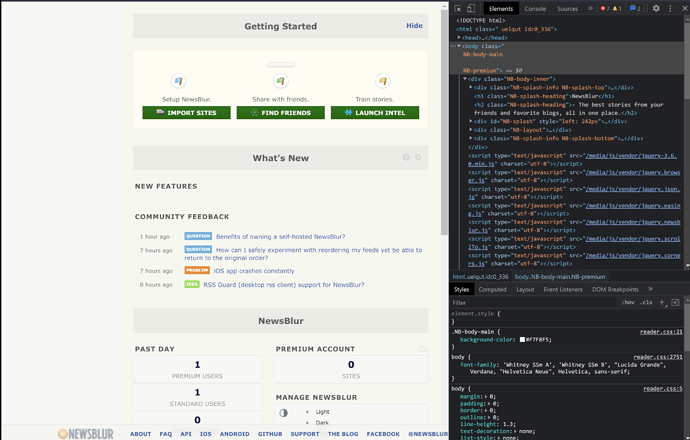 did you clone the github and then run make nb to get it work or is there a way to configure in a docker-compose.yml and just bring things up like most regular docker containers? I have an existing nginx proxy manager setup I was hoping to integrate this into to at least try it out extensively for six months (the free version doesn’t support enough feeds for me to just load the opml in from inoreader with 338 feeds and counting and I"m paid up till 2024 over there, so I’m not exactly averse to paying for this service, but I don’t exactly want to start paying for something I’m already paying for elsewhere when I haven’t determined if it is a big improvement or not. The two projects are strikingly different in what seems like opinionated ways but also this is the only other one I have looked at so far that is interesting enough to put the effort in to try it out and maybe start paying for it if self hosting goes well.)

I followed the github instructions where are clone and make nb, with some tweaks in some of the docker files needed to suit my environments. It is hard to make it works, at least for now. I may come to play again some times later when I have time.

did you have to edit the make file to change some “docker compose” to “docker-compose” to get it to get through the install? That was extremely weird to me because there are some correct docker-compose entries in there as well, no idea how that could happen in the code other than maliciously. My instance is now broken at the same place yours appears to be (weird website, unable to sign up). I spun up a new lxc to install it in so I didn’t mess with anything other than the very obvious docker compose errors in the make file.

Yes I did replacing. I do think this is the reason why my installation did not work but other works.

Are you running an older version of docker? I had to change all the docker-compose to docker compose because it would complain otherwise.

Let’s move the discussion to a new ticket. If this ticket doesn’t describe the problem, then please make a new one, either here or on github:

The website do not run fine i get several errors in Chome console Failed to load resource: the server responded with a...

Thanks Samuel for the follow-up. I could finally host my own instance after doing make collectstatic

For all arm users’ reference, I am using yusukeito’s imageproxy

Great idea on using yusukeito/imageproxy:v0.11.2. I added that to docker-compose, so the next time you git pull && make nb you’ll have a full arm64 setup.

But now I run into other situation, the pop up window show error when I click Find Twitter Friend button. I already filled the twitter token in the docker_local_setting.py. 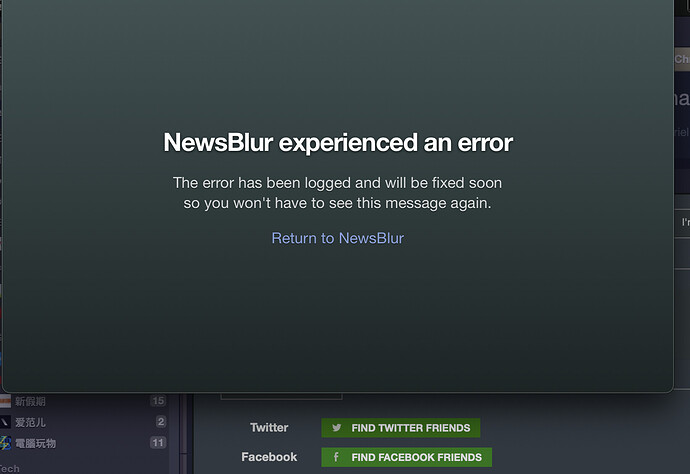 What do you see when you type make log

Also, that implies settings.DEBUG is set to False, but it’s set to True in docker_local_settings.py. Why is your DEBUG set to False?

I then correct the Key and Secret, with OAuth 2.0 I end up success loading to auth page, but after redirect this message returned:

Gotcha, from make log I know that I need to apply Elevated access in order to make it work. Just applied and now it is connected