The latest Newsblur update for Android no longer presents story titles in their entirety. On the title list for a feed, only the first two lines of a title are presented. The rest of the title is deleted.

Often, this makes it impossible to determine the precise subject matter of a story.

Also, the new font for titles is much less legible than before the update. As best as I can determine, this font cannot be changed.

Here is a screenshot of one feed: 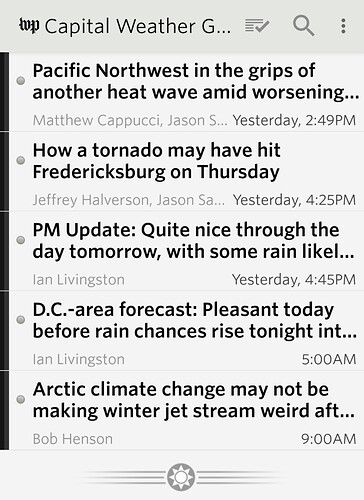 Yep, you’re right, we killed that feature. Full title was an Android-only feature and caused a number of headaches from feeds that gave overly long titles. It was also out of spec with the rest of the site, where the consistency of height balances the density of information. Now with 2 lines you have a consistent number of stories in a given space.

In your preview I see that you’re using a larger font size. So I opened a ticket to figure out how easy it would be to expand that to 3 lines for Large+.

Here's the thread and screenshot: https://forum.newsblur.com/t/android-update-limits-story-titles-to-two-lines/8910/2 I agree with the author in that we should accommodate a larger font size. So let's...