I happily use Newsblur to follow many Twitter accounts, yay! Strangely, https://twitter.com/Pinboard hasn’t worked in a while. When I look at the Fix a misbehaving site box, there are many entries like

…in the logs. But when I use the Twitter web client to look at the Pinboard account, it wasn’t suspended, but rather happily tweeting away.

Interesting! So the way NewsBlur’s twitter integration works is that it randomly chooses one subscriber’s twitter credentials to use for everybody. So in this case, that user was suspended. I’ll have to think about how to deal with that, since there’s no logic yet to handle that case.

Oh, that’s why. I just sort of noticed this myself recently (the general “why haven’t I 1 out of 600 feeds update in a while?” problem). Thanks for looking into it.

(Maybe randomly choose a subscriber for each fetch attempt, instead of consistently using the same one? So maybe ¼ of attempts will fail (assuming just one of the four twitter.com/pinboard-subscribers was suspended), but it’ll mostly work? Dunno if that’s a feasible approach.)

Over the past couple of weeks, I’ve been seeing maybe 15 twitter “feeds” that update regularly. The rest of them (literally dozens) are broken.

Is there any hope of improvement? 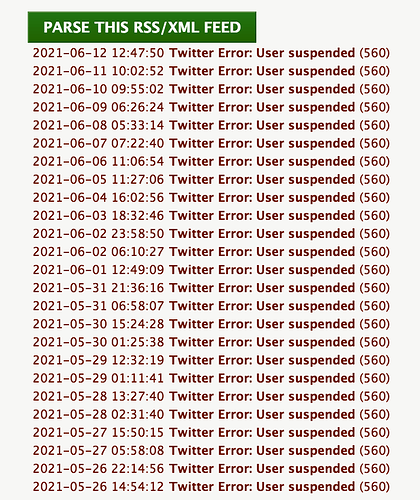 Thanks for letting me know, I have now fixed the issue and Twitter feeds that are broken like this will automatically fix themselves over the next 24-48 hours.