This post is marked green, but I only see red.

2 red tags saying I don’t want to read posts about that.
Word in the title marked red because I don’t want these type of posts.
1 green tag.

How come this feed item is shown as green? Even marking it yellow would be a stretch. 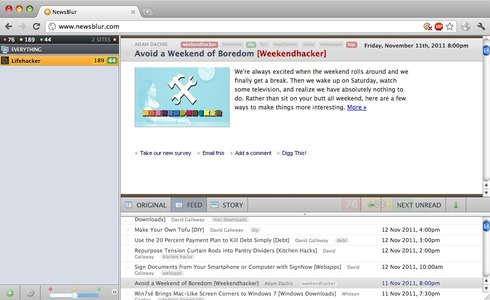 Posting this on here so you might be able to refine the algorithms.

After trying to learn it more about my Lifehacker preferences I seem to notice that any single green tag can outweigh almost any amount of red. 4 red tags VS 1 green tag makes the post go on my green list.

What’s the idea behind this? Makes it very hard to filter anything in practise.

You’re right about a single green overriding a series of reds.

The implicit assumption is that you are subscribing to a feed, so you already must want to read it. And if there’s at least *something* about a feed you want to read, you should see the story. Pretty simple. And you’re right, in practice, occasionally some heavily conflicted stories get filtered up, but I think it makes it far easier to figure out what’s going to happen, knowing that a green means you want to read it.

I would be willing to take input on perhaps having levels of filtering, or even just placing title filters above tags filters above author filters above publisher filters. In that case, a red in title overrides a green in tag.

I was thinking it would be something like that. And you are right, in most cases you would want a reset as soon as a green flag pops up. I think it just wasn’t what I was expecting.

An example with Lifehacker would be me flagging the ‘free’ and the ‘downloads’ tag as green. These are things I don’t want to see buried by noise. But at the same time I do not own an android phone so I have flagged ‘android’ and ‘android downloads’ red. I would expect a ‘free’, ‘downloads’, ‘android’, ‘android downloads’ flagged post to be neutral and coloured based on possible other flags. (I might still want to read about it when it is tagged green ‘security’ but not when it is tagged red ‘cars’)

An other example would be Psychology Today. Here I wish to follow ‘parenting’ and ‘child development’ but I’m not interested in them rattling on about whatever abuse case is on the news, so ‘child abuse’ is flagged red. Most articles mentioning children include one of the first green tags however, taking away all meaning of the red tags.

I hope you see where I’m coming from here. And I think it is something that could make NewsBlur even more intelligent. Especially for us who subscribe to feeds with plenty of tags.

I hear ya, but there’s no good way to solve this reliably and simply for all users. I certainly hedged on the play-it-safe route of allowing a green to capture all the winnings, but anything more complicated may make it impossible to reliably filter feeds and know what to expect.

Your examples sound like you would benefit from intelligence tiers. Not only a thumbs up or down, but also a score of -1 or -2 and +1 or +2. And it seems you want counting to happen.

The way I implemented scoring, I could potentially allow for either quite easily just by making a couple changes, but I really have to be convinced it’s the way to go. Also, having tiers means educating users, which is something I kind of don’t have to do right now.

Your examples sound like you would benefit from intelligence tiers. Not only a thumbs up or down, but also a score of -1 or -2 and +1 or +2. And it seems you want counting to happen.

Counting would fix most of it for me already. Tiers will of course fix many different edge cases, but I think you can work around needing those in most cases. (e.g. by adding a title match.)

Personally I think counting +1 for green and -1 for red matches will work in 99% of my (and everyone’s) filtering. The only thing I would add to that is a possible ±x for yellow matches. When an item has 20 coloured tags and the final count ends at +1 or -1 the chances are you didn’t want it to be either green or red at all. The more coloured tags go into the addition the further it could be off of 0 and still be yellow.

That way it’s still just a matter of simple green - red = rating, understandable to all.

I do agree with you, an interface should work without having to teach the user about it first.