I frequently like to share stuff I come across in my feeds on Tumblr, would it be possible to add it as a sharing service?

Great idea! Just added this, but it’s on a special branch that I’m launching this weekend (if not tonight). It’ll show up in Preferences, and I’ll add it to the new features board, so you won’t miss it when it does show up.

Awesome, that was pretty quick!

Hi. I am a new user of NewsBlur and was also looking to share on Tumblr (preferably in my queue). I can’t see this option in preferences. Any clues? 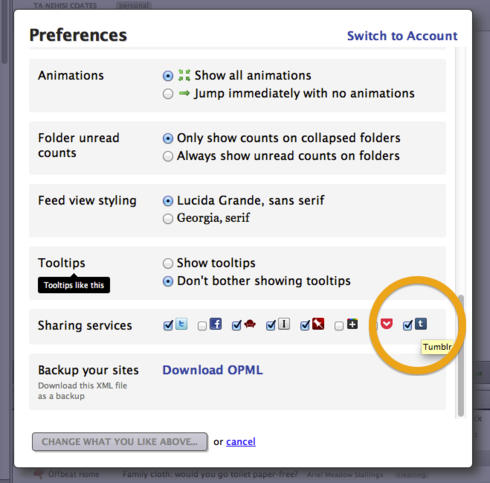 I fell like such a fool! The invisible scrollbar strikes again. I didn’t even realize those additional options were there. Thanks.

Hi - I’m reviving an old thread to ask about Tumblr again. I know how to update preferences on my computer, I followed the above instructions over a year ago and everything has been great on the computer. Problem is, I’m rarely on a computer, I do about 90% of my newsblurring on my iphone, and as of recently, an ipad air. I can’t find a way to update sharing services on these mobile devices to include Tumblr.

I read all day through newsblur, commuting or during downtime at work, always on mobile devices. The only site I ever share to is Tumblr. So because I can’t send to Tumblr from mobile devices, I end up saving hundreds of posts for later, and trying to find time to get to a computer and pull them all up and share them to Tumblr from there. It’s a pretty annoying workaround - I’ve been doing it since I started using Newsblur. Now that I’m on my iPad all the time, I rarely use my home computer and it’s starting to be less appealing.

Is there something I’m missing on the mobile devices, or is this not an option? Will it ever be an option? Currently my options on both mobile devices are to Send To Messages, Email, Twitter, Safari, Reading List, and Pocket (as well as copy text, copy URL, or copy title). On the computer, my options are to Send To Email, Evernote, Pinterest, Facebook, Pocket, and Tumblr (which is how I set it up over a year ago - and truthfully, I have never sent posts anywhere but Tumblr!). I’ve scoured the threads and my preferences/settings and haven’t found a solution, anyone know if there is one?
Thanks!