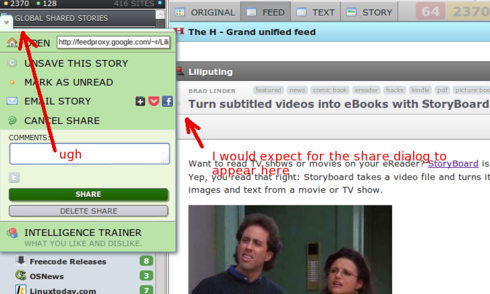 What if the story header/title is off screen? Do I scroll you up there? Since the shift+T shortcut (which will be changing once I build tags and they take over the ‘t’ shortcut and training moves to shift+T) is for advanced users, placing the menu in the top left of the screen is a workaround.

Good point, I haven’t thought of this. How about placing the share dialog where the orange triangle marking the active story is currently located (and this only when the active story’s title is off screen - when it’s on screen, place it like usual)? I think this is a good compromise.

Not everybody has that orange triangle. It’s hidden when in single story mode, or on any view but the Feed view.

Anyway, I’m trying it out and it’s not so bad to have it over the feed list. I can align it with whatever I want, but I haven’t any idea what else would be better.