I have about 150 feeds, most of which are in folders. A few are outside of folders and appear at the top. When I click on one and read the articles, things seem to hang and I can’t click on any other feeds/folders or use keyboard shortcuts.

That’s odd. Are you in the Feed view or Original view? Nothing should freeze when you click on a feed.

Feed view. After playing with it a bit more it only seems to happen when transitioning from a feed to a folder. For example, if I’m hitting ‘j’ to go through the items in a feed and hit the end, then hit ‘shift-j’ to go to the next item on the left (which is now a folder), it hangs, or never goes to the folder. I have to click on it with the mouse and sometimes reload the page.

I’m not explaining this well. I have a mixture of feeds not in a folder and folders. So, on the left side I have feeds at the top that aren’t in a folder and then folders of feeds below them. It’s when I’m on a feed and shift+down to a folder that the problem happens.

Yeah, this shouldn’t happen. You’re moving from a top level feed to a feed in a folder. Is it specific about a feed? If you mark that feed as read and then try it again so that the next feed is a different one, does it still happen?

No, I’m moving from a top level feed to a top level folder that is closed. I like reading everything in the folder together. I just tried it again and it froze my entire safari browser (version 6). Chrome also hangs.

You shouldn’t be able to move into a collapsed folder using keyboard shortcuts. It should skip to the next open folder and then the first feed.

Can you upload a screenshot of what’s happening?

Here’s a screenshot. I’ve just pressed shift-j to go to the ‘Apple folder’ and it hangs. 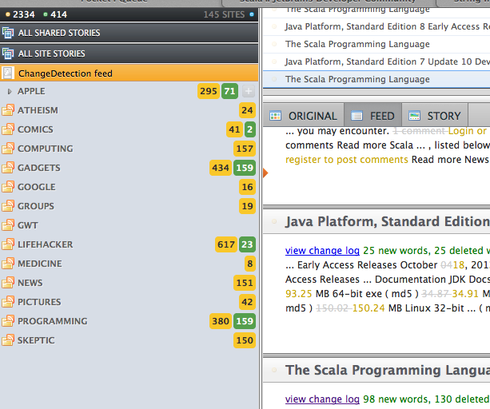 Ah-ha! Yeah, that won’t work. You need to be on a folder to shift+j between folders.