This may be happening in all of my folders, but I only actually notice it in this one. This is a freshly loaded view, and the list in the left panel has more sites/articles than the viewer in the right panel.

Also, note the top item in the right panel. I have not yet opened to view it and it’s already marked as read. Conversely, when I scroll to the last item in a folder, it does not get marked read when it hits the top of the pane. I am set to mark as read on scroll.

Windows 10, Google Chrome. Happens on all three of my computers.

I’m getting the missing items issue as well. I also use Comics RSS and those are the feeds I have the issue with.

This started happening in the last week or so with Comics RSS, but it has been an ongoing issue for years with other feeds. Sometimes stories just won’t appear if viewed in a folder, but it only happens occasionally so it was never a big problem.

Gigmodo [EDIT: Meant Gizmodo] and Kotaku, for example, sometimes have the same posts. When that happens Newsblur might only show one or none of those duplicate posts while viewing a folder. Refreshing sometimes helped, but not always. Again, it was never that big of a deal so I ignored it.

This doesn’t help but it’s nice to know you aren’t alone.

If the feed items were completely missing, I could see it being a problem with the feed source. But since they are showing in the left panel index, they are there. And I can select them there to read them so they ARE there, and are being parsed by Newsblur. Newsblur is failing to include them in the right panel content when viewing the containing folder.

Gigmodo? I’ve heard of Gizmodo, which is the same place as Kotaku, Deadspin, Jezebel, Lifehacker, and others.

Newsblur is failing to include them in the right panel content when viewing the containing folder.

Gigmodo? I’ve heard of Gizmodo, which is the same place as Kotaku, Deadspin, Jezebel, Lifehacker, and others.

Yep, that’s a typo on my part. I meant Gizmodo. Though all those sites are all from the same source, I have different RSS feeds for Gizmodo and Kotaku, and don’t follow the rest. The feeds are mostly different with a few duplicate posts. 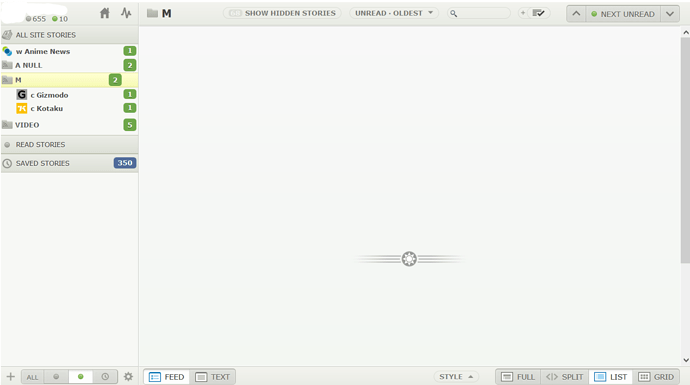