The Daring Fireball feed (15k subscriber) seems to have issues.
Newsblur reports a 553 error (not an rss feed) but the feed URL looks correct.

Can you have a look?

Not sure why but the one I am using is https://daringfireball.net/feeds/json 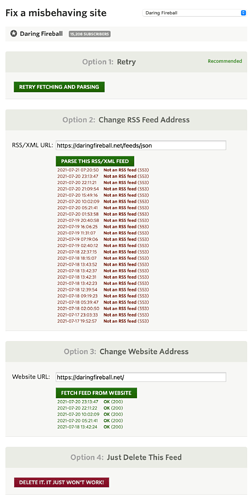 https:// daringfireball.net/feeds/main (put a space so it displays vs converting to link etc)

and this works fine

I think it’s just that the switch to new “beta” Newsblur broke JSON feeds. Traditional RSS feeds are XML, and an XML parser will definitely fail on JSON data. There were a few places that added support for JSON feeds starting a few years ago, but adoption is still really low compared to existing RSS deployments.

It stopped working a few days ago, it is more recent than the beta release

Just pushed a fixed for JSON feeds that use a different author_name structure. This feed should now be working.