When NewsBlur resolves two versions of the same URL, timestamps on shares tend to get screwed up. A reshare often inherits the timestamp of the original (bookmarkleted) share; threads collide, as under “Google’s Lost Social Network”: 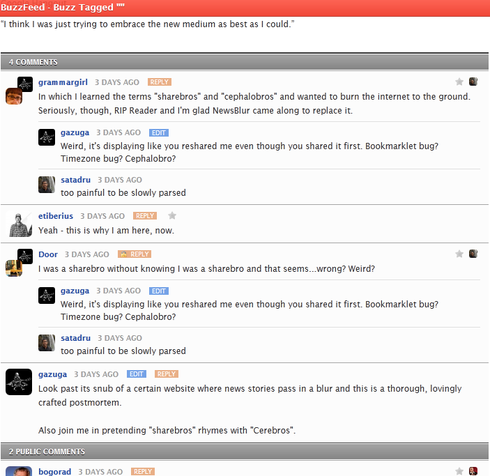 These timestamps don’t match my memory of the share chronology. (Door’s share came hours after mine; grammargirl’s share has an earlier timestamp than the one it’s supposed to be a reshare of).

Tell me if you need other examples.

Fantastic discovery. This was related to the fact that the original story was shared by the bookmarklet, which creates sites if they don’t exist. Then, the story was pushed out of the original site because it publishes so frequently. So when a new user comes in to share, the original story can’t be found, so NewsBlur uses existing shared stories to serve as the source. In this case, it was not properly cleaning the attributes of the source, which means the old attribution and shared date were being inadvertently preserved.

Good news is that I fixed the issue by being explicit about which attributes to take from both the original story, and failing to find that, any shared stories that will serve in its place.

Sorry about the issue, but it is now resolved! Your hunch was absolutely correct.