Blank page on feed view after readling a few stories

When I try to read my feeds, all appears to be working fine until I read a few items (about 1-15). Then, the feed view appears blank for the rest of articles and the only way to “fix” this is to reload the page. Web view works as expected, only feed view is affected.

Does anyone have this problem too? 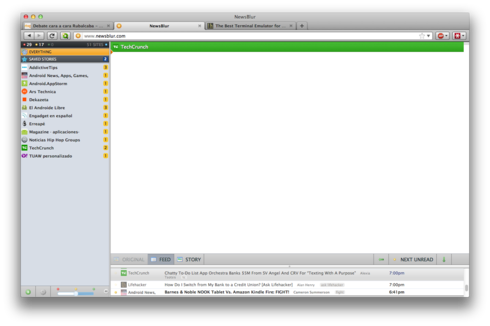 It’s possible that this is a result of a change I made last night to auto-linkify URLs. I’ll take a look.

I’ve been having this problem sporadically as well, but I think it started sometime last week.

I had experienced the same bug this morning with Google Chrome in Windows, so it probably isn’t specific to my configuration at home. It’s really annoying, because I can’t read more than a few feeds without interruption.

Is this only in the River of News, or does it happen when looking at a single feed? Does it happen after you page a few times? Does it ever happen on the first load of a feed/folder?

This only seems to happen when reading feeds from the “Everything” section, not from a single feed and only after I had read a few articles. It had never happened to me on the first load.

Could this have something to do with the account being free or premium? I want to buy premium and the only thing that is retaining me from that is this bug, that makes NewsBlur near to unusable for me.

If this could be related with the river of news limits, I will be happy to pay premium now and continue using NewsBlur.

Holy moly, you’re totally right. No wonder I’ve never seen it. It’s a premium vs. standard bug. For standard users, NewsBlur hides stories past the first 10, but it’s possible that it is mis-counting due to any intelligence classifiers you have set.

I’m testing out this theory, but it looks like you’re absolutely right based on what should be happening.

I will be getting the premium then and problem solved