I have found a bug in the Android app (which I love!). If you flip between the “unread” and “focus” duplicate items start to appear for shared items and to a lesser extent normal feeds. It seems like it mat be something to do with the folders collapsing/expanding. 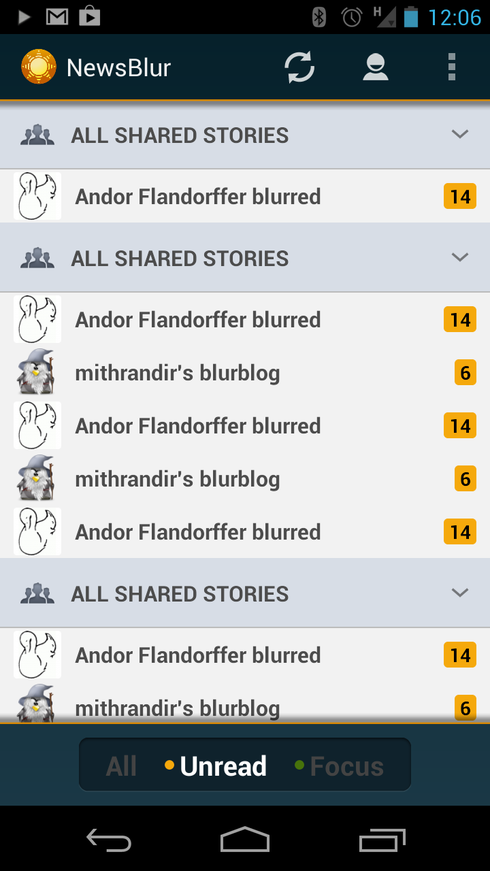 I did have to wipe the app data and login in again to get a clean feed list but this seems to be fixed.

Spoke too soon. Some updates it’s clean, some updates you get some folders duplicated. It seems it is capable of fixing itself on a subsequent refresh but the problem will return an indeterminate number of refreshes later.

I’ve noticed. Can’t figure it out and the developer is out of ideas. Sigh, one day I’d love to get this fixed.

Confirmed as still there on 1.0.55 even after a clean re-install and settings wipe.

A bit perplexing and frustrating, and when I import my full swath of feeds likely to become more so…

Well, the update on the Android came, and this is still not fixed.

It seems pretty simple, it happens when items get marked as read, and lists are removed from my feed list.

All feeds move up, and at the bottom the items thus get duplicated.
(Usually in twos as the group AND last unread feed get removed)

You move things up without clearing the end of your list…

Yeah, I was disappointed to see that this wasn’t addressed in the update. Hopefully soon.

It’s very likely that this isue will get fixed in the next “big” android update that will address the general slowness of the app. The duplication bug is a side effect of some of the same root causes.

It seems this is taken care of with the latest update (version 1.2). I haven’t seen it on my phone (Motorola Razr Maxx HD on 4.1.2) or my tablet (Samsung Galaxy Tab 2 on 4.1.?, not sure of the version on that one). App seems pretty snappy most of the time. I have seen a few oddities in marking feeds as read but that is fairly infrequent.

Yep, this should have been fixed in 1.2. Sorry I forgot to update this thread!

It’s on the short list for the coming hot fix release.