Hello. This is regarding the issue about the Active story marker in the story titles pane jumps for a moment when pressing space. You said to make another thread, so here it is. You managed to fix it at some point (see that thread), but now it’s broken again for some time.

Steps to reproduce:
0. make sure you’re in feed view mode and you have the “Story titles pane” set to “Top”

Heres also an image, I hope it will help to clarify this: 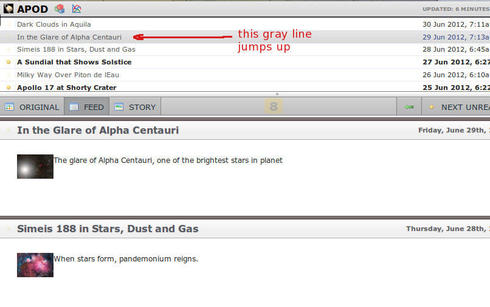 Ok, fixed it. Looks like it was a race condition when the story was in an odd state of being detected. It was clearing out an offset cache that was causing the mouse pointer to think it was offset downwards the exact height of the story titles pane. Yeeeah. It’s not terribly complicated logic, but there are 3 separate offsets that need to be added correctly together, and one of them was being incorrectly reset at a certain point. Let me know.

Yes! You fixed it! I have such a warm fuzzy feeling now when browsing the feeds with Newsblur: uuuhhh, pretty :D. I think this was the last little problem that was keeping Newsblur from becoming perfect for me. Thank you.