I am not really sure what the section is called, but its the list of articles that are, in my case, above the window that actually displays the article. I for one would like to turn that off so I can scroll down the list because it shows the picture and the snippet of the article. It gives me a much better way to see if I am interested in the article or not.

Does this make sense? I know that Samuel is super busy just trying to get things working at this point, but afterwards I would like to see this implemented. 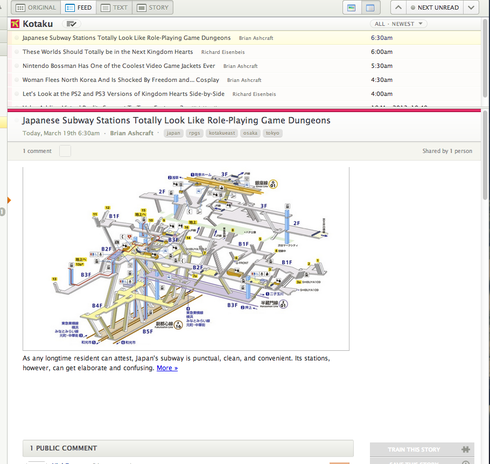 It took me a minute to figure out how I did this, but it is possible.

Click on the Gear icon on the bottom right, click Preferences, and then feeds. Set the Story titles pane at the bottom. Then exit out of preferences.

Then just resize the titles all the way to the bottom. It won’t come back unless you manually resize it back up.

Near the top-right of that screenshot are two unlabelled buttons; one has a window with a coloured blob at the top and white underneath it while the other one has a bunch of horizontal lines. Since the buttons don’t have labels, I mentally refer to them as the “paned” and “list” views.

Currently you’re in the “paned” view (the coloured-blob-and-whitespace button), where you have a pane of headlines at the top, and the content in the bottom pane. If you click the “list” button, you’ll go to a view that’s just headlines, and if you click a headline it will ‘expand’ to show that entire story.

I haven’t yet figured out exactly how that interacts with the Preferences setting called “Feed View”, but that might also be worth messing with.

@Bradley - Thats what I have been doing and it works to an extent, but there view controls that are present in that list view (setting New vs Unread and listing order) that disappear when you do that. That could cause issues down the road.

@thristian - Thanks for the heads up on that. However, switching that kind of seems to blend the two separate lists into one and still doesn’t really work the way I want it to. I just want to be able to see the “preview” window without the list of articles.

shift + t does this, but not in dev mode for some reason. Probably a bug.

It would be nice if there was a button for hiding/unhiding too though - not everyone bothers to look up the keyboard shortcuts, nor likes using them.

@Job van der Zwan - “shift+t” is EXACTLY what I need! Since it is working on the non-dev site I can only assume that when things calm down it will get rolled into the new site.